picture: Women with raised hands image coutesy: EPW Feminism is the radical notion that women are... 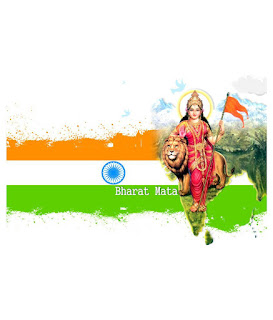 The popular, mainstream Indian discourse upholds the twin ideas of the saintly mother and the myth of Baharat mata- both of whom are the objects of not just affection but also worship. These two ladies have been cropping up in our discourse more frequently of late. In fact "gau mata" is probably more revered than the plain old mata as of now, but that's a whole other discussion for another time.

This mythical mother, is at once the ideal, to which women are upheld by the culture, as well as the perfection they themselves strive to achieve.

For sure, the anthropomorphised Mother India is closely linked to this image of the ideal of mother. She, too, is a quiet nurturer, all-sacrificing, and without any needs of her own. What's more, she helps give vent to the hyper-masculiniy of her 'sons'. Mind you, it's always the sons, never the daughters. To wreak violence in her name, shed blood in order to shore up her borders. Let's also remember this image of mother india is never that of a Dalit Bahujan or Adivasi or Muslim or tribal woman or that of any other minority community. She must belong to not only the upper caste but upper class too.

The concepts of these two mothers are closely linked to the status of women in Indian society. A society with such deeply entrenched misogyny, that women have internalised too. These ideals also determine which women are talked about and who are never discussed by people like us. For example, there's been a lot of breast beating lately in the national as well as international media about how there aren't enough  Indian women in the work force. There are worse articles, which seem to suggest Indian women are simply too lazy to work.

The focus of most of these pieces is the educated middle class woman who, if she quits her job after marriage, does so because her family doesn't allow her out of a sense of honour. Or, because the monetary benefits of the job don't compensate for the employing the help to run the household.

What these articles and studies fail to mention is that most poor women who work, whether inside the home or outside it do so as a compulsion, not by choice. At the same time most of this labour is unseen and not paid. Like this article says women farmers are hardly even counted as farmers, let alone their concerns discussed or addressed. These women lead quiet lives filled with hard labour but are never celebrated in popular culture. Do they constitute the fabric of bharat mata?

Many men will tell you they are fine with such "women's empowerment" which involves women going out to work. Because it doesn't involve them giving up any real privilege. They continue to lord it over at home while the woman brings in additional moolah. Simply having been born male gives men the privilege to decide who is the ideal woman.

The elusive idealised Indian woman has nothing on the unicorn. Ordinary Indian women can slog all their lives and do everything in their power to keep their families functioning and happy, but the tag of bharat mata will always elude them. The perfection Inidan men seek in their women will always remain outside their grasp.

In all this, has women's opinion of this idealisation ever been taken into account?  It is time Indian women took up with all seriousness the task of carving out the image of the ideal Indian woman to reflect their realities.

The ideal Indian woman is not just a lone standard to be upheld. She is a plurality of identities to be celebrated. Let's make her a reflection closer to the reality of the hardworking multitude of women who toil tirelessly everywhere- in our fields and factories and at so many other jobs, paid and unpaid. It's time to time to a more realistic Bharat mata in our own images.

One day long ago pic.twitter.com/mKijkcSEki